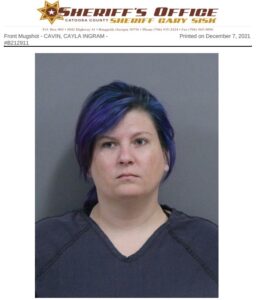 Ringgold, GA (December 7, 2021) – Catoosa County Sheriff Gary Sisk announced the arrest and termination of now former deputy Caleb Eugene Cavin, 33, and his wife Cayla Ingram Cavin, on charges of possession of a controlled substance with intent to distribute, drug related objects, use of a cellphone/communications device to facilitate a felony drug transaction. Additionally, Caleb Cavin is charged with violation of oath.

Sheriff Sisk said he received information in November about Cavin and contacted the Georgia Bureau of Investigation (GBI) to look into the allegations. The investigation resulted in Cavin’s termination on December 3, and criminal charges against him and his wife. The couple is accused of manufacturing cannabis laced edibles for resale and using mobile device applications to complete illegal transactions.

“All of my sworn and civilian employees are held to highest standards of integrity and respect of the law,” Sheriff Sisk said. “It is disappointing to learn of a sworn officer violating their oath to serve our community honorably.”

Mr. and Mrs. Cavin are being held in the Catoosa County Jail pending an initial appearance and bond hearing.